Not all photograph studios were stationary. Your ancestors may have had their photographs taken aboard a boat or even a specially outfitted railroad car, as did this group of gentlemen around the turn of the last century. 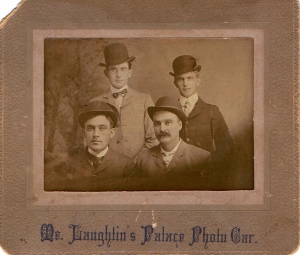 George Hiram Thoma, also known as George A. Neilson, is the slim, fair-haired young man pictured at top right in this photograph taken aboard Mr. Laughlin’s Palace Photo Car.1 George, born in 1880,2 was raised in Clayton County, Iowa,3 but his exact whereabouts during his late teenage years and early manhood are up for debate. He may have spent some time in Cedar County, Nebraska,6 before winding up in Osceola County, Iowa, where he married in 1902.5 This photograph was likely taken at a train station somewhere in northwestern Iowa or northeastern Nebraska circa 1900.

The men all wear dapper hats, jackets, and ties. The man next to George seems to be the trendsetter of the group with a check or plaid jacket, striped bow tie, eyeglasses, and his soft felt bowler or derby hat at a jaunty angle. The man at front right is the only one who is not clean shaven; he also appears to be somewhat older than the others.

Who were these men, and what were their relationships to one another? None bear a remarkable resemblance to George, with the exception, perhaps, of the man next to him. Perhaps the men were friends or business associates, although thanks to George’s elusive lifestyle prior to his marriage and his use of an alias, much is left to the imagination as to with whom, exactly, he may have associated.

Perhaps somewhere there exists another copy – or three – of this very photograph, taken long ago aboard Mr. Laughlin’s Palace Photo Car.

1 thought on “All Aboard Mr. Laughlin’s Palace Photo Car”