All I can think is that Odile must have been desperate. She hadn’t seen her eldest son, Edward, in five years, and it had been at least two since she’d laid eyes on his younger brother, Fred. The last she’d heard, the two men, both in their thirties, had left the state, and she had no way of contacting them.

When the census enumerator arrived at the door of her home in Sioux City, Woodbury, Iowa, Odile (Millette) Adam saw in him a reason to hope. Here was someone who surely knew a thing or two about tracking people down. If nothing else, perhaps he could ask around? Had anyone seen her sons, Edward and Fred? The census enumerator strayed from the lines gathering information about Odile’s age, address, and origin, and jotted some hasty notes in the margins: 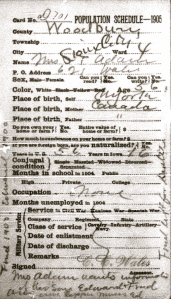 Although some words are indistinct (can anyone make out what it says?), the message is clear: The Adam boys had made their way west, and, whether dead or alive, they had disappeared without a trace. There may not have been much of anything that the census enumerator could have done, save for keeping his eyes and ears open in case the men turned up around town, but at the very least, he appears to have been sympathetic to Odile’s concerns.

Fred, also known as Alfred G. Adam, would eventually return to Sioux City, though perhaps not for a few more years; records suggest he returned to the area around 1909.2 Of Edward Adam, however, there seems to be no paper trail. In the summer of 1900, the Sioux City Journal reported that the then twenty-nine-year-old Edward, who had left home at the age of fourteen, had returned to his family, but his behavior towards them was “abusive, inconsiderate, and contemptuous.”3 His ailing father submitted a petition requesting a restraining order against him in order to protect himself as well as his minor children, and Edward, at least under his given name, is seemingly absent from record thereafter.4

Odile’s apparent distress according to the 1905 Iowa State Census is made more interesting by the fact that her husband of nearly forty years, Timothy Adam, was not recorded as a member of her household.5 Was he away searching for their sons, or was he simply visiting relatives across the state line in South Dakota or in his native Massachusetts? Was he aware that Odile was seeking word of their sons, or had he washed his hands of them? We may never know, just as Odile may never have learned the fate of her two eldest surviving sons before her death late the following year.6

The 1905 Iowa State Census images are available for free on FamilySearch. Even if there aren’t any notes written in the margins, you can learn a great deal about an ancestor from the details that were formally requested, including military status, level of education, and number of years as a resident of the state. If you would like to know who lived in the same household as your ancestor before turning to the individual cards, see the index available in the Iowa State Census Collection on Ancestry.com.

3 thoughts on “A Mystery in the Margins”