When I began researching the topic of paper moon photography, I was surprised to find that these crescent moon photo booth props are making a comeback by way of trendy, vintage-style wedding decor. In case you didn’t know, flappers are big these days, and the popularity of this era has influenced a new generation to pose for classic shots with a smiling man in the moon. However, paper moon photo booths got their start even before the days of Gatsby, likely around the turn of the twentieth century.1 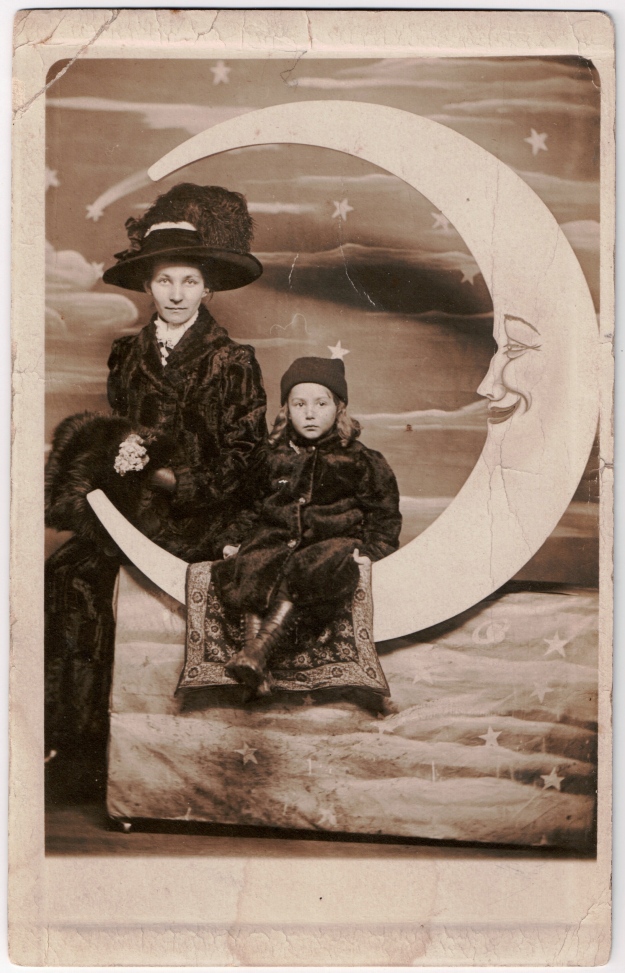 This particular paper moon photograph was printed on a real photo postcard circa 1912. The moon backdrop itself is not one of the more elaborate, with an obvious break in the night sky for seating purposes. In fact, what looks like a wheel to roll the seat into place is also visible, and a small “magic carpet” conceals the primary seating area. The crescent moon smiles, and the stars, as is typical among paper moon photography, are present even within the crescent – where, realistically, they would be blocked by the moon in shadow. A shooting star can be spotted at the upper tip of the crescent, and a planet appears below the moon.

The mother and son posed here are Melanie (Lutz) and Gerald “Jerry” Adam of Sioux City, Woodbury County, Iowa. Both are dressed in long fur coats, Melanie’s of a fashionable collared design while Jerry’s is fastened simply with three large buttons. A glimpse of Melanie’s leather gloves is visible, and a stylish plumed hat is atop her head. Jerry wears a practical stocking cap and high button boots. His curls are long, to his shoulders, which was not atypical among young boys of the era.

Given their attire, it is obvious that this photograph was taken on a cold winter’s day. Perhaps the paper moon photo booth was set up outdoors or in an unheated (or under-heated) space as a temporary attraction; this mother and son may have simply stumbled upon it and decided to surprise Jerry’s father with their fun souvenir. As Jerry was born in the summer of 1908,2 it seems most likely that this photograph dates to the winter of 1911-1912, or, at the latest, the winter of 1912-1913. January 1912 in particular was a cold month, with Sioux City registering a record low of −35°F on 12 January.3 However, even beyond such extremes, Sioux City was no stranger to weather that would have required one’s warmest winter coats for a visit to the moon!