As much as I love research in historic newspaper collections, it’s not often that I find an ancestor’s name attached to a truly colorful piece. There are the expected mentions at milestones and sometimes occasional notations of one’s comings and goings in small town social columns—but rarely has an ancestor sparked his or her own headline or been featured not just in the local news, but in the newspaper of the state’s capital.

In 1927, my nineteen-year-old great grandfather managed just that. Gerald Joseph Adam, the son of Henry Joseph Adam and Melanie Veronica Lutz, was born in Sioux City, Woodbury County, Iowa, in 1908. Nineteen years later, he became involved in a spirited disagreement regarding the ownership of a particular dog. When this dispute went to court, it caught the attention of a journalist who saw the humor in the situation, and thus half a page—including photographs and sketches—was allotted to the story in the Des Moines Register.

Gerald was a recent graduate of Sioux City’s Central High School and was employed as a doorman at the downtown Princess Theater. He was also the proud owner of a German Shepherd named Fraulein. However, when another Sioux City resident attempted to claim Fraulein as his own, Gerald wound up in court—with his mother and their family cat in tow—to settle his case. He ultimately emerged victorious, but the full story, which featured several unconventional attempts to demonstrate ownership of his dog, is transcribed below: 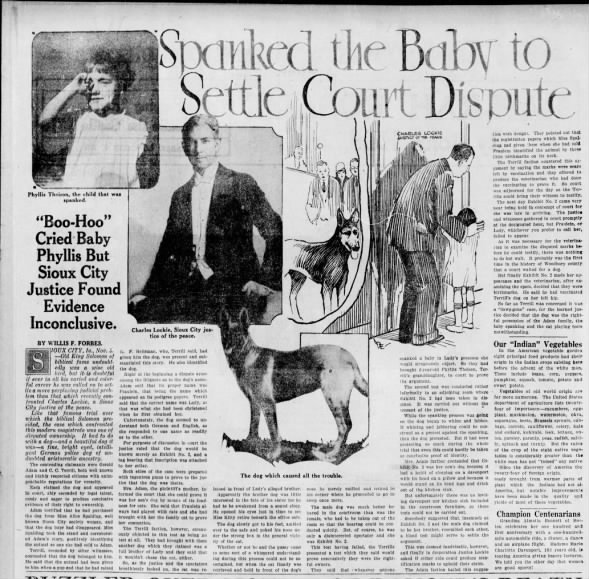 Sioux City, Ia., Nov. 4. – Old King Solomon of biblical fame undoubtedly was a wise old bird, but it is doubtful if ever in all his varied and colorful career he was called on to settle a more perplexing judicial problem than that which recently confronted Charles Lockie, a Sioux City justice of the peace.

Like that famous trial over which the biblical Solomon presided, the case which confronted this modern magistrate was one of disputed ownership. It had to do with a dog – and a beautiful dog it was – a fine, bright eyed, intelligent German police dog of undoubted aristocratic ancestry.

The contending claimants were Gerald Adam and C. C. Terrill, both well known and highly respected citizens with unimpeachable reputations for veracity.

Each claimed the dog and appeared in court, ably seconded by legal talent, ready and eager to produce conclusive evidence of their right to ownership.

Adam testified that he had purchased the dog from Miss Alice Spalding, well known Sioux City society woman, and that the dog later had disappeared. Miss Spalding took the stand and corroborated Adam’s story, positively identifying the animal as one she had sold to Adam.

Terrill, seconded by other witnesses, contended that the dog belonged to him. He said that the animal had been given to him when a pup and that he had raised it. F. Heitzman, who, Terrill said, had given him the dog, was present and substantiated this story. He also identified the dog.

Right at the beginning a dispute arose among the litigants as to the dog’s name. Adam said that its proper name was Fraulein, that being the name which appeared on its pedigree papers. Terrill said that the correct name was Lady, as that was what she had been christened when he first obtained her.

Unfortunately, the dog seemed to understand both German and English, as she responded to one name as readily as to the other.

For purposes of discussion in court the justice ruled that the dog would be known merely as Exhibit No. 2, and a tag bearing that inscription was attached to her collar.

Both sides of the case were prepared with ingenious plans to prove to the justice that the dog was theirs.

Mrs. Adam, the plaintiff’s mother, informed the court that she could prove it was her son’s dog by means of its fondness for cats. She said that Fraulein had always played with cats and she had brought with her the family cat to prove her contention.

The Terrill faction, however, strenuously objected to this test as being no test as all. They had brought with them another dog which they claimed was a full brother of Lady and they said that it wouldn’t chase the cat, either.

So, as the justice and the spectators breathlessly looked on, the cat was released in front of Lady’s alleged brother.

Apparently the brother dog was little interested in the fate of his sister for he had to be awakened from a sound sleep. He opened his eyes just in time to see Miss Kitty retire beneath the office safe.

The dog slowly got to his feet, ambled over to the safe and poked his nose under the strong box in the general vicinity of the cat.

Whether or not he and the pussy came to some sort of a whispered understanding during this process could not be ascertained, but when the cat finally was retrieved and held in front of the dog’s nose he merely sniffed and retired to his corner where he proceeded to go to sleep once more.

The male dog was much better behaved in the courtroom than was the female, who had to be taken out of the room so that the hearing could be conducted quietly. But, of course, he was only a disinterested spectator and she was Exhibit No. 2.

This test having failed, the Terrills presented a test which they said would prove conclusively they were the rightful owners.

They said that whenever anyone spanked a baby in Lady’s presence she would strenuously object. So they had brought 6-year-old Phyllis Theison, Terrill’s granddaughter, to court to prove the argument.

The second test was conducted rather informally in an adjoining room where Exhibit No. 2 had been taken in disgrace. It was carried out without the consent of the justice.

While the spanking process was going on the dog began to whine and jabber. If whining and jabbering could be construed as a protest against the spanking, then the dog protested. But it had been protesting so much during the whole trial that even this could hardly be taken as conclusive proof of identity.

Mrs. Adam further contended that Exhibit No. 2 was her son’s dog because it had a habit of sleeping on a davenport with its head on a pillow and because it would stand on its hind legs and drink out of the kitchen sink.

But unfortunately there was no inviting davenport nor kitchen sink included in the courtroom furniture, so these tests could not be carried out.

Somebody suggested that, inasmuch as Exhibit No. 2 and the male dog claimed to be her brother, resembled each other, a blood test might serve to settle the argument.

This was deemed inadvisable, however, and finally in desperation Justice Lockie asked if either side could produce identification marks to uphold their claim.

The Adam faction hailed this suggestion with delight. They pointed out that the registration papers which Miss Spalding had given them when she had sold Fraulein identified the animal by three little birthmarks on its neck.

The Terrill faction countered this argument by saying the marks were scars left by vaccination and they offered to produce the veterinarian who had done the vaccinating to prove it. So court was adjourned for the day so the Terrills could bring their witness to testify.

The next day Exhibit No. 2 came very near being held in contempt of court for she was late in arriving. The justice and witnesses gathered in court promptly at the designated hour, but Fraulein, or Lady, whichever you prefer to call her, failed to appear.

As it was necessary for the veterinarian to examine the disputed marks before he could testify, there was nothing to do but wait. It probably was the first time in the history of Woodbury county that a court waited for a dog.

But finally Exhibit No. 2 made her appearance and the veterinarian, after examining the spots, decided that they were birthmarks. He said he had vaccinated Terrill’s dog on her left hip.

So far as Terrill was concerned it was a “dawg-gone” case, for the learned justice decided that the dog was the rightful possession of the Adam family, the baby spanking and cat playing tests notwithstanding.

4 thoughts on “A Canine in the Courtroom”