Wilhelm Heinrich Thoma was born on 16 December 1827 in the village of Weißenstadt, located in what is now Upper Franconia, Bavaria, Germany, the son of Paulus and Elisabeth (Schmidt) Thoma. At the age of twenty-four, Wilhelm, along with his parents and six siblings, immigrated to America. Traveling aboard the Uhland, the family left Bremen bound for New Orleans, where they arrived in June 1852.

New Orleans was not to be their final destination; the family traveled up the Mississippi River until reaching northeastern Iowa, where they soon settled in the village of Garnavillo in Clayton County. A biography within The History of Clayton County, Iowa notes, “Upon coming to the United States, William Thoma proved himself an ambitious young man whose courage and determination were shown in definite action.” 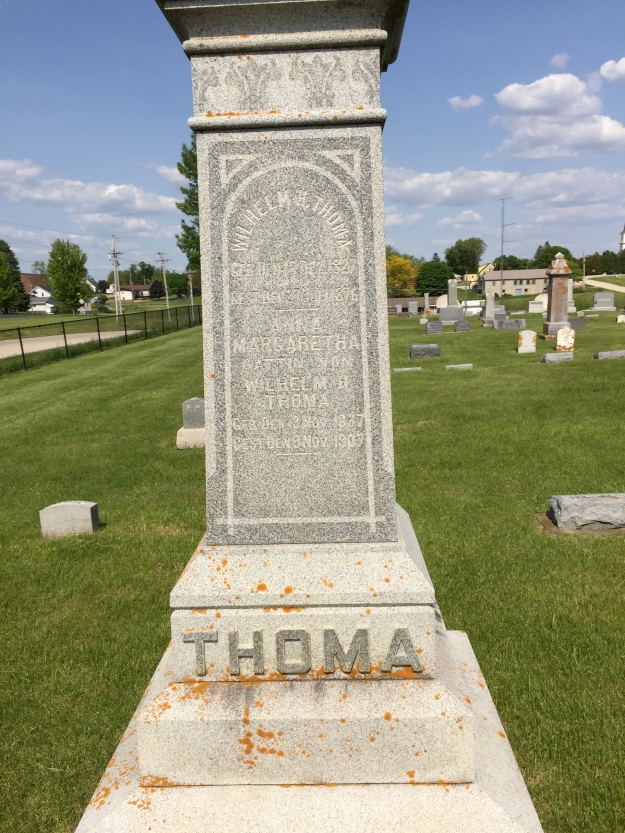 Wilhelm first entered the mercantile business while in his twenties, shortly after arriving in Iowa. In 1859, he established his own general store in Garnavillo, offering groceries and dry goods, which he operated until the time of his death. It was said at that time that “in his personal and business relations with the people he was the ‘soul of honor,’ a good, honest, straight forward man.”

Wilhelm was active in his community throughout his adulthood; his obituary noted, “In public matters Mr. Thoma has taken a lively interest, and exhibited a degree of earnest zeal in the advancement of his fellow countrymen, enjoying their confidence and support. He has held minor offices of trust, discharging the duties thereof satisfactory to the people.” One incident of note is that during the grasshopper plague of 1874, following an appeal from Kossuth County, Iowa, Wilhelm’s name was included among a list of individuals “designated to receive contributions for the grasshopper sufferers.” Furthermore, William was a member of the county Board of Supervisors at the time of his death, an office he was said to have held in “a most excellent and upright” manner.

Wilhelm Heinrich Thoma died in Garnavillo on 27 July 1876; he was forty-eight years old. Lengthy obituaries in multiple local newspapers did not share the cause of his death, but lauded his talents, one noting that he had “been counted among Clayton County’s best and most public spirited citizens,” and that “his own village loses a citizen whom it was equally a pleasure and honor to name as a friend.” Another commented upon his wealth and prominence, and called him “a man universally honored and beloved where known.” Wilhelm was buried at the Garnavillo City Cemetery in Garnavillo, Clayton County, Iowa.