Headlined as “The Musical Midgets,” Herman and Augusta Rice were deemed in one newspaper advertisement to be “the most interesting little people now before the public.”1 Another called them “German Midgets” and noted that they were “The Most Extraordinary Dwarfs of the Age.”2 This carte de visite of Herman and Augusta Rice, like that of the sideshow performer Ada Zingara, was found in an antique album that once belonged to an unidentified family of Kaukauna, Wisconsin.3 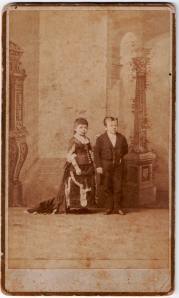 Herman and Augusta Rice appear dressed in fine Victorian fashion and stand next to pillars to emphasize their short stature. Augusta’s hairstyle is particularly striking; a flat bow adorns the top of her head, and small curls are arranged across her forehead in such a way that it almost seems as though they could be part of a hairpiece. The bow and flattened style of her bangs were fashionable in the late 1870s.4 She wears a carefully fitted gown with a train and no shortage of flounces, ruffles, and lace trim. With a locket or pendant necklace and a bracelet setting off her ensemble, Augusta appears to be dressed very well indeed. Herman looks equally sharp in a formal fitted dinner jacket with a pocket watch and freshly shined shoes. 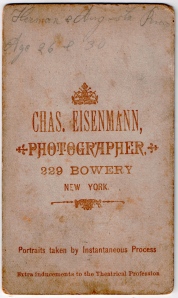 The photograph was taken by Charles Eisenmann, a photographer in the rough-and-tumble Bowery district of New York City who frequently photographed performers such as these.5 Although he was employed as a photographer in the city as early as 1876,6 he didn’t make the move to 229 Bowery, the address stamped on the back of this photograph, until 1879 or 1880.7 Eisenmann remained at this location at least until 1883.8

Herman and Augusta Rice, an alleged brother-sister pair, appeared at Harris’ Mammoth Museum in Cincinnati in 1883,9 were affiliated with Keith and Batcheller’s Mammoth Museum in Boston in 1884,10 and were showcased as curiosities at Forepaugh’s Dime Museum in Philadelphia in 1885.11 They had toured with P. T. Barnum in 1877, at which time they, along with a third sibling, Johanna, used the more Germanic surname Reis.12 One wonders, however, whether these names were merely a part of their identities as performers.

Who were they, and what became of them when their dime show days were over?