It was 09 December 1909 when Jens Jacob “James” Walsted and Kathrine Christensen were married by Reverend Julius A. Larson of the Danish Evangelical Lutheran Church in Sioux City, Woodbury County, Iowa.1 Both James and Kathrine had been born in Denmark; both had left their native country several years prior, James in 1902 and Kathrine in 1906.2 At the time of their marriage, James was twenty-nine years old and Kathrine was twenty-three.3

Sioux City’s sole Danish church, located at 1113 12th Street, was organized in 1890, and met in a former Norwegian Lutheran Church that was moved to this site in 1892.4 While what may well be this original building, a modest one-story frame structure situated in a residential neighborhood, still stands to this day, it is now the Iglesia de Dios Evangelio Completo Pentecostes. At the time that James and Kathrine were married, however, it was home to a congregation of nearly two hundred and sixty Danish Lutherans, and it seems quite likely that it was through this immigrant community that James and Kathrine had the opportunity to meet.5 There is no known account of their marriage, nor any known photographs.

The couple settled in Sioux City, where in 1910, within a few months of their marriage, they could be found rooming at a property on the corner of 7th and Pearl Streets in downtown Sioux City, a location that is now a parking lot across the street from a children’s museum.6 James worked as a bricklayer, and family lore suggests that he may have helped lay the brick for St. Boniface Catholic Church at this time.7 Kathrine, who before her marriage had been a servant at a house that stood on what is now the campus of Bishop Heelan Catholic High School, was at home.8 The couple’s first child, Roy Louis Christian, would be born in 1911.9 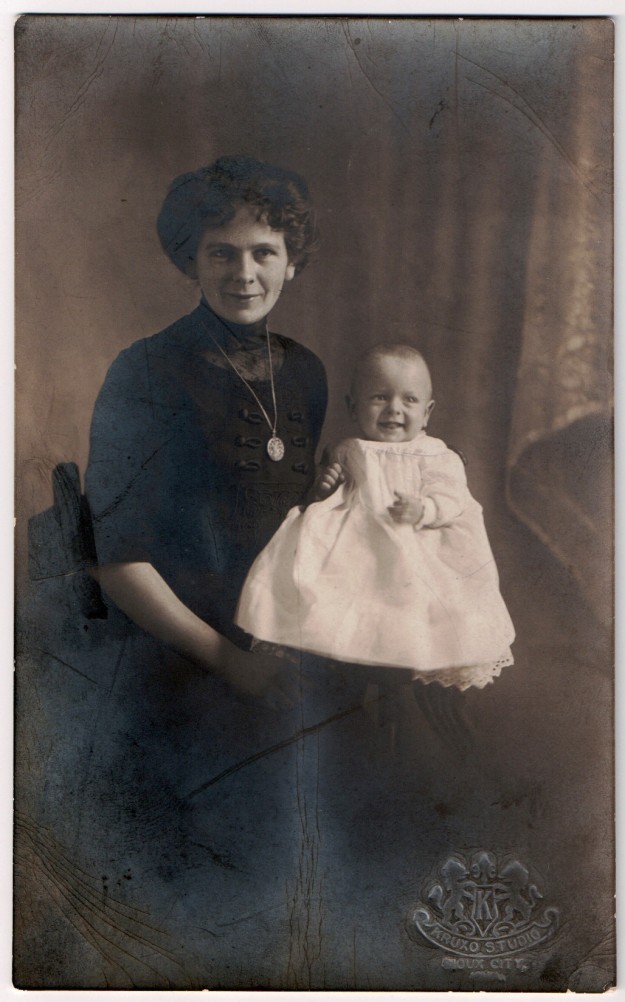 The congregation of the Danish Evangelical Lutheran Church eventually outgrew their space on 12th Street, and in 1922 a new church, located at 1924 Jones Street, was dedicated.10 In 1930, the church was renamed Our Savior’s Lutheran Church, and within a few years, Danish language services ceased.11 Some seventy years later, the church once again introduced bilingual services, this time in Spanish, but soon after, in 2009, the church closed its doors.12

At the time that James and Kathrine married, Sioux City’s population was nearly forty-eight thousand, and included a diverse immigrant population represented in its many foreign-language churches.13 For recent immigrants James and Kathrine, it must have been a great comfort to find there a close-knit Danish community that shared their native language and cultural heritage.

6 thoughts on “A Danish Marriage in Sioux City”