Kathrine (Christensen) Walsted had lived in America for nearly thirteen years when she was photographed with her two young sons in 1919.1 She had immigrated from Denmark at the age of twenty; now in her early thirties, she resided with her husband and children in a small rental house in Sioux City, Woodbury County, Iowa.2 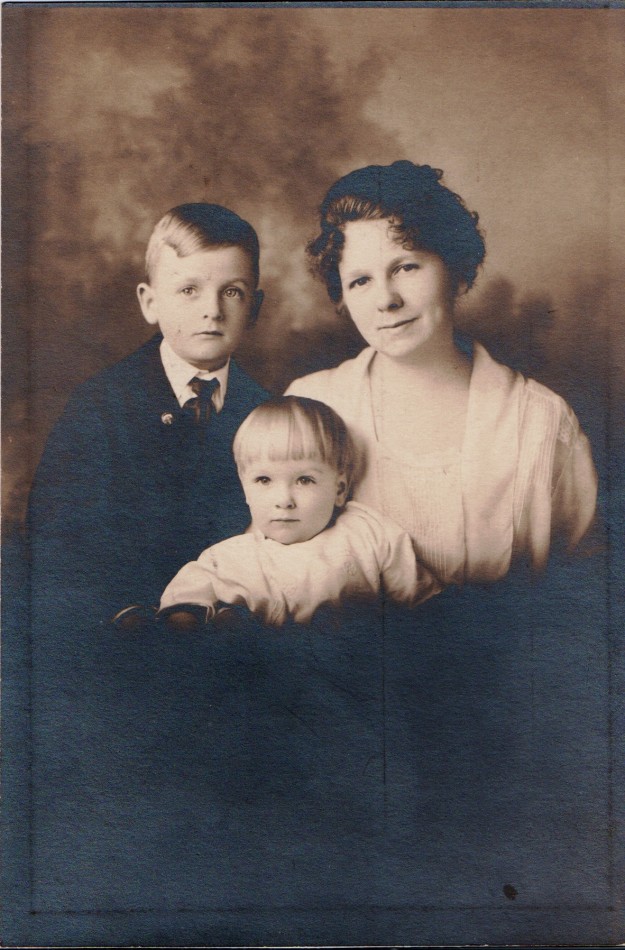 It is a bit puzzling why her husband of nine years, Jens Jacob Walsted, known as James, was not photographed with her. Although James registered for the draft in September of 1918, it is not believed that he ever served in World War I.3 However, as he was a bricklayer by trade, it is possible that he traveled at times to work on building projects. Perhaps his wife wanted to surprise him with a portrait to keep with him when away. This may also be why Kathrine alone was photographed with her eldest son when he was an infant, several years prior.

Of course, James may simply not have enjoyed having his photograph taken! Although he lived to the age of seventy-five, only three informal photographs of him have been uncovered.4 One gives a glimpse of him as a young man, while the other snapshots were taken in his later years.

In any case, in this photograph, Kathrine appears elegant yet warm, with a faint smile at her lips and a hint of a dimple at her cheek. Her thick hair is pinned up in a bun, the trend of the bob having not yet swept America, and soft curls escape at her temples. She wears what might have been a white cotton voile waist.5

Her eldest son, Roy, seven or eight years old here, wears a dark suit and tie.6 His hair is neatly trimmed and combed to the side, and his expression is wide-eyed and solemn. Young James, named for his father, looks to be about a year and a half old, his fair hair in a bowl cut.7 His loose-fitting garment appears to feature some embroidery; as Kathrine was known to have been a member of a local needlecraft club, perhaps this was her own handiwork.8

Notably, Roy had barely recovered from a life-threatening brush with polio when his brother was born in November 1917. In September of that year, the Sioux City Journal had reported, “Roy Walstead [sic], 6-year-old son of Mr. and Mrs. James Walstead [sic], 406 South Helen avenue, Morningside, is expected to recover completely from an attack of infantile paralysis, according to the attending physician. The boy is able to walk alone now and in six months he is expected to have recovered entirely. If recovery is complete it will constitute one of the few cases on record, according to the physician.”9

Roy did indeed recover, although he always walked with a limp, and it has been said that his younger brother was his staunch defender against bullies. However, Kathrine was surely grateful to have both of her sons by her side and in good health when, one hundred years ago, she dressed them in their finest clothes and ventured with them to the portrait studio.

1 thought on “A Mother and Her Sons”