Nancy Stilley was raised on the Illinois frontier, and died a pioneer in Kansas. From what little I know about her life, she’s a perfect example of a “Fearless Female” whose story should be shared in honor of National Women’s History Month. 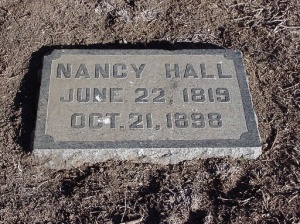 Although it must have been difficult, Nancy seems to have managed her household and farm through the tumultuous years of the Civil War. Following the settlement of her husband’s estate in 1868,9 she relocated to Kansas with her children, including those who now had families of their own.10

By 1870, Nancy had settled in Solomon, Saline County, Kansas, where she held a respectable amount of real estate worth $1100 and personal property worth $600.11 Four children, between the ages of twelve and sixteen, were at home.12 Nancy was to remain in Kansas for the remainder of her life, eventually joining the household of her eldest son.13 She lived to the age of seventy-nine, her death the result of an unfortunate accident during what was likely a routine visit to her children and grandchildren:

“Last Friday morning, October 21, 1898, Mrs. T. G. McCance hitched a team to a buggy for the purpose of driving her mother, Mrs. Nancy Hall, to the residence of her son, E. L. McCance. Just as the ladies started the team suddenly turned the vehicle enough to throw the occupants to the ground. Mrs. Hall struck the ground with sufficient force to tear the flesh from one side of the face, break the cheek bone and inflict internal injuries, from which she died in a few hours.”14

Nancy was buried two days later, her burial attended “by a large number of friends and relatives,” in the Gypsum Cemetery in Gypsum, Saline County, Kansas.15