The newspaper headline must have brought a few chuckles: “OLD FOLKS HAVE ROMANCE.” The story continued, “Romance is not all reserved for young people, as the marriage of Isaac N. Holman, aged 70, of Decatur, Neb., to Mrs. Sarah E. Fenton, aged 51, of Springdale, in Sioux City, will testify. […] This is the third marriage for each of the contracting parties. Both are well along the avenue of life and to them the marriage represents good judgment as well as a goodly bit of romance. They have known each other a long time and the mutual admiration they have entertained has grown gradually until the marriage yesterday placed its happy seal upon their growing affection.” Following their marriage on 24 August 1908 at the home of the Reverend W. H. Montgomery of the Haddock Methodist Episcopal Church in Sioux City, Woodbury County, Iowa, the couple was to visit Omaha. They would settle in Decatur, Burt County, Nebraska, where Holman, “said to be quite well to do,” made his home.1

That evening, their story appeared in another Sioux City newspaper: “LOOKING FOR LAND HE FINDS HELPMATE.” This version of the story was written with a level of flowery detail that, while entertaining, I don’t quite trust:

“I.N. Holman, a wealthy retired farmer of Decatur, Neb., came to Sioux City several months ago on a land deal. At the office of a real estate dealer he met a charming black-eyed widow, Mrs. Sarah E. Fenton, who had chanced in there on business. When they were introduced, he immediately lost all interest in Sioux City property or any property for that matter, and devoted all his time to the widow. Holman is 70 years old, and he pressed his suit with such ardor that before he returned to Decatur he had made a contract for something which he wouldn’t trade for all the farms in Iowa, namely the attractive widow. Today he returned to close the deal, which he says is the best he ever made. A license was issued this afternoon, the bride giving her age as 51. They will be married this evening and after a two weeks’ wedding trip will make their home at Decatur. “Maybe people think we’re foolish,” said the bride, blushing like a school girl, “but we don’t, we’re too happy.”2

This is far from the whole story. First, there are, in fact, two stories presented by these competing news articles. Did the couple meet at the land office, or had they been acquainted for years? This we may never know for sure; it seems unlikely, but not impossible, that the couple had crossed paths before meeting in Sioux City. Second, the “attractive widow” most likely did not have the black eyes of Bess the landlord’s daughter, charming as the description may be.3 And was she even a widow? Well, yes and no. Her first husband, George W. Fenton, died tragically in 1880 when accidentally shot by her brother-in-law.4 Her second husband, however, was still alive and well at the time of her third marriage; Sarah had divorced John Hoffman in 1902 citing his drunkenness and death threats.5 However, it would have been far from unusual for a woman to claim widowhood over divorce. 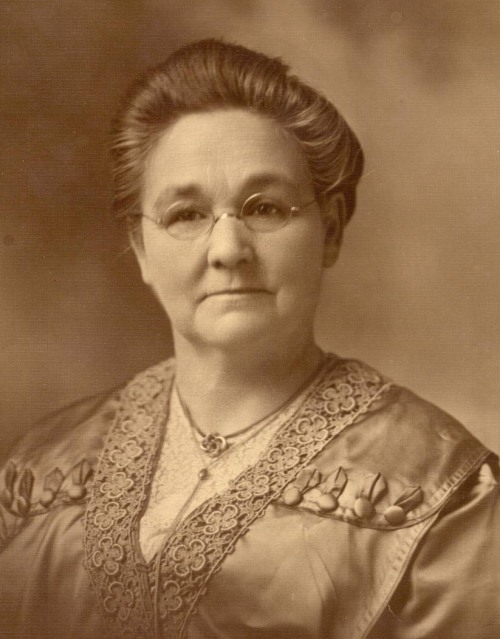 Finally, would Isaac and Sarah live happily ever after? Unfortunately not. Isaac was granted a divorce from Sarah in 1914;6 a probate petition filed by his son the previous year, while suggesting that Isaac “indulged in intoxicating liquors to excess” and was “changeable, forgetful, and stubborn,” also stated that “the amount of money demanded from him by his current wife annoyed him considerable.”7 Oh dear. Isaac did not remarry before his death in 1922,8 but Sarah would marry – and divorce – once more.9 She resumed the use of the Holman name and at the time of her death in 1930, she was referenced as the widow of Isaac Newton Holman. Her short-lived marriage to this “wealthy landowner” was, perhaps, her one claim to local fame and financial stability.10

Lesson learned? Never assume. I had assumed that because this was the couple’s third marriage, and because they married in a community with a population greater than thirty thousand, that no mention would be made of their marriage in the local newspaper. In fact, I didn’t bother to check until their names turned up in the Findmypast database featuring a newspaper from across the state, and then learned that more than one version of the story existed. As it turns out, you never know what details of your ancestor’s experience might have made a compelling story deemed worthy of reprint!

END_OF_DOCUMENT_TOKEN_TO_BE_REPLACED

Nancy Stilley was raised on the Illinois frontier, and died a pioneer in Kansas. From what little I know about her life, she’s a perfect example of a “Fearless Female” whose story should be shared in honor of National Women’s History Month.

Although it must have been difficult, Nancy seems to have managed her household and farm through the tumultuous years of the Civil War. Following the settlement of her husband’s estate in 1868,9 she relocated to Kansas with her children, including those who now had families of their own.10

By 1870, Nancy had settled in Solomon, Saline County, Kansas, where she held a respectable amount of real estate worth $1100 and personal property worth $600.11 Four children, between the ages of twelve and sixteen, were at home.12 Nancy was to remain in Kansas for the remainder of her life, eventually joining the household of her eldest son.13 She lived to the age of seventy-nine, her death the result of an unfortunate accident during what was likely a routine visit to her children and grandchildren:

“Last Friday morning, October 21, 1898, Mrs. T. G. McCance hitched a team to a buggy for the purpose of driving her mother, Mrs. Nancy Hall, to the residence of her son, E. L. McCance. Just as the ladies started the team suddenly turned the vehicle enough to throw the occupants to the ground. Mrs. Hall struck the ground with sufficient force to tear the flesh from one side of the face, break the cheek bone and inflict internal injuries, from which she died in a few hours.”14

Nancy was buried two days later, her burial attended “by a large number of friends and relatives,” in the Gypsum Cemetery in Gypsum, Saline County, Kansas.15