In the fall of 1895, just a year after his older brother died as a result of epilepsy, Alfred Adam collapsed on the street in the midst of a seizure.1 Twenty-two at the time, Alfred, the son of Timothy and Odile (Millette) Adam, was an employee of the wholesale grocer Tolerton & Stetson in Sioux City, Woodbury County, Iowa.2 The Sioux City Journal reported the following:

“Fred Adams, a young man in the employ of Tolerton & Stetson, fell in Water street last night in what at first appeared to be an epileptic fit. Symptoms of hydrophobia soon developed and he had the actions of a dog attacked with the rabies. He barked and snapped and was in great agony. It took the combined strength of four men to hold him. The fit lasted almost an hour. The sufferer was taken to the police station and placed in a cell. He finally became calm and said he was bit by a dog thirteen years ago. He believed the fit was the result of that bite. When he talked Mr. Adams seemed to be all right.”3

It of course seems highly improbable that a dog bite more than a decade prior was the reason for Alfred’s “fit,” particularly as his own brother had been similarly afflicted with seizures. Indeed, epilepsy is known today to have a genetic link. However, Alfred may have had good reason to want to downplay this incident: his brother was committed to an asylum as a young adult and died at the age of twenty-five. Unlike his brother, Alfred seemed able to live out a normal life. 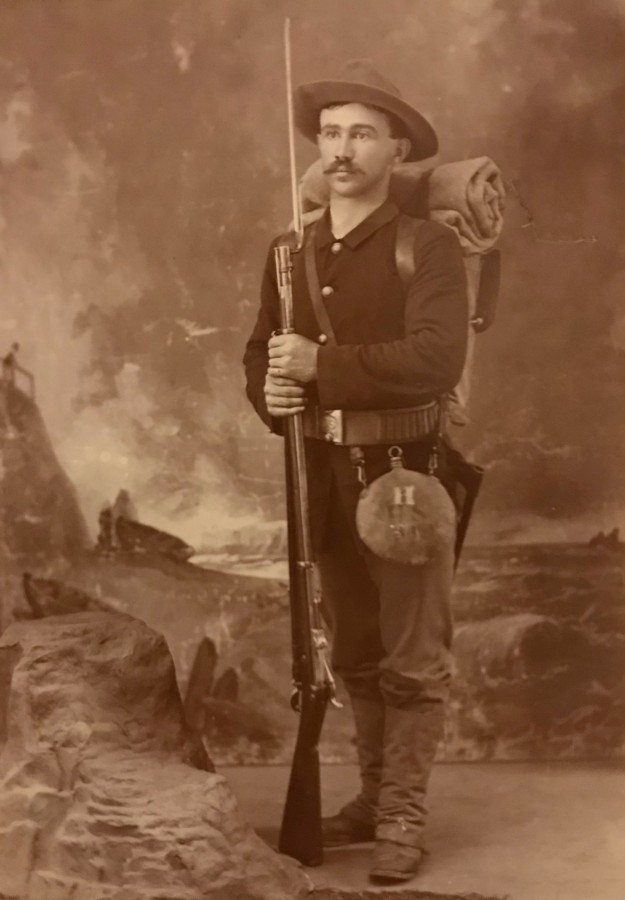 In May of 1898, shortly after the outbreak of the Spanish-American War, Alfred apparently felt well enough to volunteer to serve in Company H of the 52nd Iowa Volunteer Infantry.4 In a portrait that was likely taken shortly after he mustered in at Camp McKinley, which was located at the Iowa State Fairgrounds in Des Moines, he posed proudly in uniform, nearly dwarfed by his musket. Alfred saw no action during the course of the three-month conflict; after time spent stationed in both Des Moines and in Chickamauga, Georgia, the 52nd Iowa Volunteer Infantry was mustered out of service in October of that year.5

His brief time in service, however, may have sparked feelings of wanderlust, as his whereabouts for much of his thirties are unknown. Notes in the margins of his mother’s information card for the 1905 Iowa Census suggest that he headed west to Seattle in 1903, but no more than that is known.6 After eventually resettling in Sioux City, he was employed for many years as a freight checker for the Chicago and North Western Railroad.7

At the age of forty-seven—although he claimed to be fifty—Alfred married Margaret Nelson, a widow with two teenage daughters.8 He is not known to have had any children of his own. Two years after his marriage, in 1923, Alfred filed a patent for an electronic swivel connection, a notable accomplishment for a man who had only attended school through the third grade.9 His application read in part:

“My present invention has for its objects the production of an improved electrical swivel connection adapted to be interposed in a multiple electrical conductor cord, as a telephone or lamp cord to effectually prevent such cord from twisting upon itself and yet form a perfect electrical connection of low resistance.

Furthermore, the invention contemplates a device of this class which is comparatively inexpensive in construction and to and from which the cord conductors may be readily attached and detached.”10

Despite this accomplishment, however, when asked years later about their late uncle Alfred, it was his Springfield rifle that his nephews remembered most.11