Very few of my immigrant ancestors ever had the opportunity to revisit the countries they left behind, but Mathias Noehl of Holsthum, Rheinland-Pfalz, Germany did so on two occasions. Mathias came to America as a young man in the spring of 1886, eventually settling in northeastern Iowa.1 Late in life, he began to write a reflective memoir; its tone was frequently melancholy, hinting at tragedies and disappointments, and it was left unfinished. Mathias wrote warmly, however, of the rural village where he had grown up. His first return trip to Germany was in 1894, to visit his aging parents.2 His second and final return trip was decades later, in 1938, when he himself was an old man.3 Mathias was a keen observer and thoughtful writer, and his memoirs offer insight into the emotions of an immigrant now a stranger in his homeland. 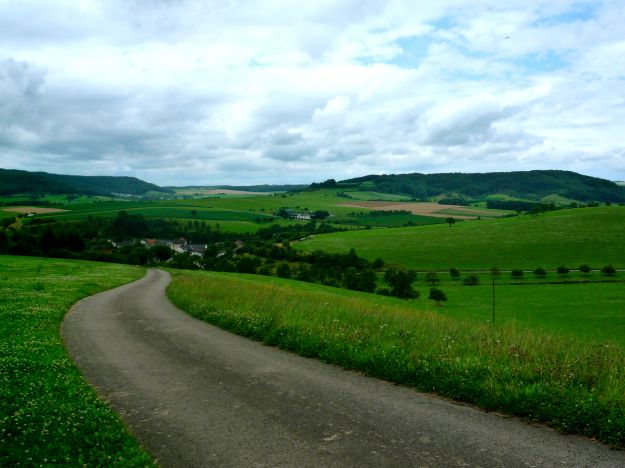 As his memoirs are lengthy, today I want to share an excerpt concerning his journey from Iowa to Germany in the summer of 1938. Mathias began, “After having longed for forty-four years to see my old home again, and to visit the land, at the bosom of which I had enjoyed my youth, I was permitted to carry out my desire.” He traveled by train from New Hampton, Chickasaw County, Iowa, to “the indestructible city of Chicago,” before transferring to another train. He wrote, “I met companions who were bound for the same goal, New York, and who created with their singing a joyful frame of mind. The number of homesick travelers increased, from station to station, and the words of the song ‘at last the long desired hour has arrived,’ sounded louder and louder […]. There was an excitement as if we were going to a wedding. We saw roses on every thorn, and when we returned, only the thorns were left.”4

Once arrived in New York, Mathias prepared to board the ship Hamburg:

“A Frenchman advised us not to entrust ourselves on the ocean on such a small boat like the Hamburg (22,000 tons). An Englishman spoke of the short time it would take their steamer to cross the Atlantic. A German warned us of both. And on the streets of New York, a Greek offered us his food wares, and praised the Germans, which was no disadvantage to his business.”5

The chaotic scene at the docks made a lasting impression on Mathias. He wrote, “A dense crowd of human beings, who were tired of America, hustled over the landing bridge with the slogan ‘England or Death!’ Away from the ‘Fortune Wheel’ of America, where they had drawn only blanks. […] They hoped for better things, because no American misfortune could force them out of the ranks of those who struggled for survival. They were followed by young girls from Scotland who were homesick, or who had found bad luck in love. Whichever the motive, they longed to return to the laps of their mothers in Edinburgh. Then came women carrying weeping children, while boys were being dragged along on the coattails of their fathers. Then I saw young married women embracing their husbands with tears in their eyes. Men saying farewell to their wives, tearing themselves away from their embraces, to disappear into the lower part of the boat. Perhaps they had not the means to make the trip jointly. Then came the last reserve of the Knights of Fortune of America. Carrying their small possessions on bent shoulders, with their knees tottering, plunging into the belly of the ship, and blessing the wheel-of-fortune of America with a curse. Queen Mary, Queen of all the boats, sailed on, laden with joy and grief.”6

He continued, “The sight of the steamer Isle de France was different. When the happy-go-lucky Frenchmen marched down the planks into the rooms of the ship, here you could view and examine all the modern fashions of others, and not so modern, from the latest Parisian costumes to the costume of Adam. […] Fare-thee-well you gay Frenchmen. We once fought with you at our side. […] If all goes well, we may still join hands across the Atlantic, and not as hereditary enemies.”7

“At last we had to go where the German steamer [Hamburg] was anchored. At both entrances there were double guards, looking downcast, which I could not understand. Neither could I understand the police force of twenty-four men marching up and down the landing place. […] After a short while, we one thousand passengers were ordered on board the ship. Tired as we were, we sought our berths […]. It was a nerve-wracking job for our stewards to tell each one the room assigned for him, but as always, we found everywhere the friendliest service. Kindness, goodness, and the friendly, ‘Oh pray, please,’ of the North German were heard in all corners of our steamer, and then I could not help noticing everywhere the German love for order, punctuality, neatness, cleanliness, and kindness. No cross words or unclean talk. All ready to obey. All ready to serve. We had left all our cares behind us in America.”8

The passage was not without a scare, however: “On June 26, we left the Gulf Stream behind us and came into cool water. On the northeastern sky, we noticed a copper coloring, which indicated storm. […] Fishes jumped out of the sea, and our steamer began to heave ominously, and to sink again. Waves high as a house descended upon one another, and plunged into the awful abyss […]. Women made desperate attempts while vomiting to maintain their equilibrium on the boat, heaving to and fro. Seasickness on board, tables were knocked to the floor, someone broke a leg on the deck. I myself, in order not to be thrown over, grasped several chairs and rolled over against the iron wall, while the thunder was rolling. A speech to be made by the captain was cancelled. Seamen loaded with life belts rocked to the high fore deck where we had to assemble, in case the worst would come. I had picked an Englishwoman with whom I should share a life belt, in order to become a solitary food for the big fish, in case I should not be spared the jump into eternity. But, as on Lake Genesareth long ago, the storm abated […].”9

Mathias also wrote of the friendships forged with the other passengers – English, Irish, French, Swiss – throughout the ocean crossing. At each stop, more passengers disembarked:

“Thus reducing more, our family of one thousand passengers, without hope of seeing each other again. Although we had faced each other as enemies in the World War, we had become fast friends during our brief sojourn on the boat. And, many left us with tears in their eyes. Unbelievable, for those who have never seen such a scene. The anchors are lifted, the band plays ‘Farewell,’ whistles sound as signals, handkerchiefs are waved.”10

At last, Mathias’ voyage came to an end: “Land in sight: the Fatherland! The new Germany dressed in its best summer clothes, June 30, 1938, and now we began nervously to pack our clothes, to present our passports, to receive our railway tickets, to give tips to our stewards, to thank for congratulations, etc. At the command of the Captain, our steamer jerked into its landing place, where a thousand years before, St. Bernard had preached; where Rembrandt had painted his pictures; where the poets had sung their songs.”11

Of course, as it turns out, Mathias Noehl had impeccable timing when planning this last trip to Germany, just months before Kristallnacht and a year before the invasion of Poland. I will share the next chapter of his memoir another day, which details his experiences revisiting his beloved Holsthum, and his dismay at the inevitable changes that were brought upon his home district of Bitburg-Prüm.

5 thoughts on “His Last Trip to Germany, Part I”