Mathias Noehl attempted to settle in Canada on at least two occasions after emigrating from Germany to the Midwest as a young man in 1886. After a stint living among relatives in Minnesota, he married fellow immigrant Elisabeth Hoffmann in North Washington, Chickasaw County, Iowa, in 1896. The couple had a son in 1897 and a daughter in 1898, and in 1899, as Mathias later wrote in his memoir, “The desire for migratory life befell us again.” He continued:

“We loaded all that we possessed into a railway car, and traveled to the plains of Alberta, Canada, to meet another stroke of ill fortune, which we had not expected. The climate and the foodstuffs of that country did not agree with us, so we took sick and the doctor advised us to return to the U.S. We went back to the forests of Minnesota, where between 1886 and 1894 I had built my air castles, with which I comforted my wife. My wife felt disappointed when we arrived there, and all I possessed consisted in nothing else but air castles. Besides, we had the terrible cold weather in winter 1899. We stayed there until spring; when the birds flew northward, we remembered the fleshpots of Iowa, and this drove us back to where in 1896 I had found my Waterloo. There, the death of two old people had pity on us, which made a dwelling available for our children and us […]. In 1900 we returned in bitter disappointment to North Washington, with all our savings lost, and one more child. That child is all we gained with our adventures in Canada.”

It is unknown where exactly in “the plains of Alberta” the Noehl family lived in 1899, but it is possible that they were in Pincher Creek, a settlement that attracted German-American Catholics around this time.

Despite finding failure in Alberta, Mathias remained convinced that Canada was in his future. In the spring of 1903, now thirty-four years old and the father of four children, he applied for a homestead in Saskatchewan. The homestead was located eighty-five miles east of Saskatoon near the village of Muenster, in an area known as St. Peter’s Colony. This colony, founded in 1902, was the brainchild of the Benedictine order, the German American Land Company, and the Catholic Settlement Society of St. Paul, Minnesota; land was set aside specifically for German Catholics, who responded to advertisements for the colony and flocked north from the Midwestern states. Here there was to be ample farmland, a colony of like-minded people who shared their language and faith, and a new monastery at the helm, to boot. 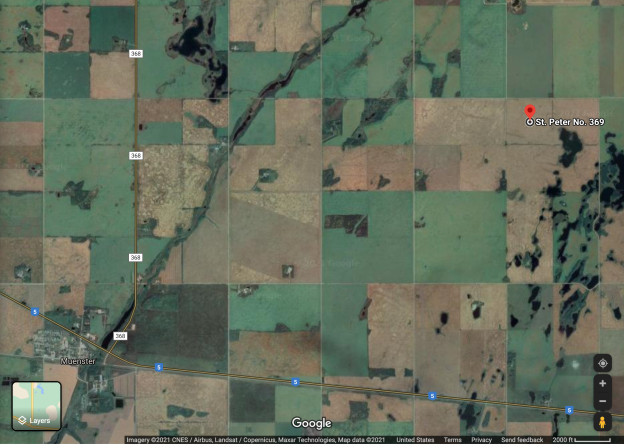 The Noehl family was the target audience for this venture, but ultimately did not remain long enough to prove the homestead. A grandson recalled being told that the family found the water in Saskatchewan to be too alkaline, and apparently many settlers were displeased with the brush-covered land. As the Noehl family’s fourth child was born in Iowa in the spring of 1904, it seems that their time spent in Saskatchewan amounted to less than one year.

Mathias, ever filled with wanderlust, attempted once more to relocate from the Midwest, although he no longer had his sights set on Canada. As the story goes, he visited Oregon several years later and, finding a welcoming German community (perhaps Mt. Angel) and stunning forests that reminded him of his homeland, began to make plans for his family to move once again. However, as his wife was at that point expecting their seventh or eighth child, she put her foot down—and in Iowa they remained for good.

Becker, A, “The Germans in Western Canada, A Vanishing People” (http://www.cchahistory.ca/journal/CCHA1975/Becker.html : accessed 26 June 2021).

Richard Buscher, conversation with the author, 2018; notes in author’s files. Richard is the son of Elinor (Noehl) Buscher and a grandchild of Mathias and Elisabeth (Hoffmann) Noehl.