Johann and Maria (Kulot) Cichos and their children were not alone in leaving their home village of what is now Nowa Wieś Książęca, Poland, located in a region known as Lower Silesia, to settle in a small farming community in south-central Minnesota. Many of their neighbors had made and would make the same journey, all playing their parts in a story of chain-migration repeated across other Silesian communities and terminating in Minnesota’s Faribault and Blue Earth counties, where farmland was both more plentiful and more arable than in the old country.

Nowa Wieś Książęca (formerly Fürstlich Neudorf) is located approximately forty-five miles east of Wrocław (formerly Breslau), the historical capital of Silesia and Lower Silesia. The older population is said to speak a Lower Silesian dialect to this day, and the nineteenth-century Church of the Holy Trinity still stands near the center of the village. However, it was in the neighboring village of Trębaczów (formerly Trembatschau), at the eighteenth-century Church of the Assumption of the Blessed Virgin Mary, that Johann Cichos and Maria Kulot were married on 20 January 1852. They had five children in Nowa Wieś Książęca: Elizabeth, Hedwig, Johanna, Franz, and an unnamed son, their first child, who was stillborn. It seems that only Hedwig and Franz were living at the time that the Cichos family emigrated from Poland.

Johann and daughter Hedwig, who was then eighteen years old, left Poland first. In November 1873, they traveled together from Bremen to New York aboard the Hansa. Six months later, Maria and nine-year-old son Franz followed; they were in the company of numerous others from their home village who were also bound for Minnesota. They departed from Hamburg, rather than Bremen, and arrived in New York aboard the aptly-named Silesia in May 1874.

Little is known about the lives of Johann and Maria in America. No oral history nor photographs remain. They settled in Minnesota Lake, Faribault County, Minnesota in 1874, and census records indicate that they were farmers. Their daughter Hedwig married in Minnesota Lake in 1875; between her first and second marriages, she had ten children, nine surviving, all of whom would have had the opportunity to know their grandparents. Sadly, however, Johann and Maria’s son Franz died in 1881 at the age of eighteen after contracting spinal meningitis. 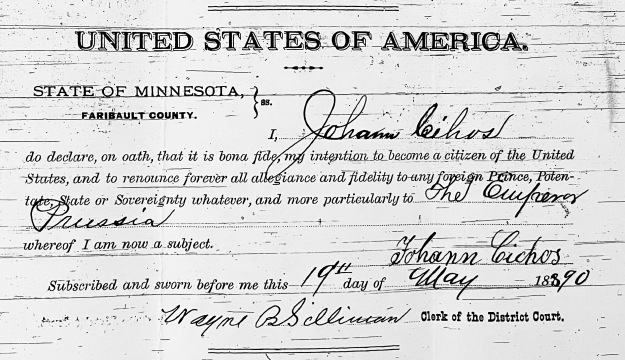 At the time of the 1900 census, a teenage granddaughter resided with Johann and Maria; both were by then seventy years of age. It was noted in the census that Maria could not speak English, a fact that is not altogether unsurprising. Although she had at that point lived in America for more than twenty-five years, as Minnesota Lake had a strong Polish presence, there would not have been a shortage of opportunities to hear and speak her native language or languages, which very likely included German as well. Johann, however, did speak at least some English, and had in fact received American citizenship, renouncing the Emperor of Prussia, in 1897.

Maria died in 1902 and Johann in 1907, both in Minnesota Lake, the only home they had known in America. At the time of Johann’s death, he owned forty acres of farmland, valued at that time at about $2,000; his daughter Hedwig was his sole heir. Both Johann and Maria (Kulot) Cichos were buried at St. John the Baptist Catholic Cemetery in Minnesota Lake.

Negative search, Faribault County Register (18 July-01 August 1907), Wells Forum Advocate (18 July-08 August 1907), Winnebago City Press News (20 July-03 August 1907), and Easton Leader (18 July-20 August 1907). A search was made by the Minnesota Historical Society in May 2021 for an obituary of John Cichos; no obituary was located despite a search across the four aforementioned newspapers.

1 thought on “A Silesian Family in Minnesota”