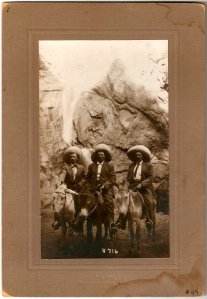 This souvenir photograph features three mustachioed men in sombreros posing astride burros in front of a rugged western landscape. In 1911, Peter Jorgensen, Fred Nelson, and Chris Callesen of Yankton County, South Dakota, pictured here from left to right, ventured west to Seven Falls in the South Cheyenne Canon near Colorado Springs, El Paso County, Colorado. I can’t know for sure what brought them west; I do know that, decades earlier, brothers-in-law Fred and Chris had traveled at least as far as the Black Hills to sell eggs to the miners.1 It’s possible that this trip to Colorado, however, was purely an opportunity for sightseeing and adventure, rather than business. 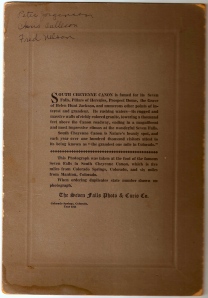 The reverse side of the photograph, mounted on heavy card stock, provides printed detail about the South Cheyenne Canon, famed for its natural beauty and sites of historical interest. The Seven Falls Photo & Curio Co. was responsible for this photograph, which was “taken at the foot of the famous Seven Falls.” It was possible to order duplicates by referencing the number shown on the photograph. (The number on the mat came only recently.) Given the number 716, it seems that plenty of these souvenir photographs must exist; I spotted several on eBay and on The Henry Ford Online Collection.

Did the men ride to the Falls on the burros? As of 1911, there was, in fact, a Cheyenne Burro & Carriage Co. in operation,2 so if they weren’t part of the package when the men paid for their photograph, they may have opted to rent the burros independently to ease their exploration of the area – or just for fun. The same may go for their sombreros!